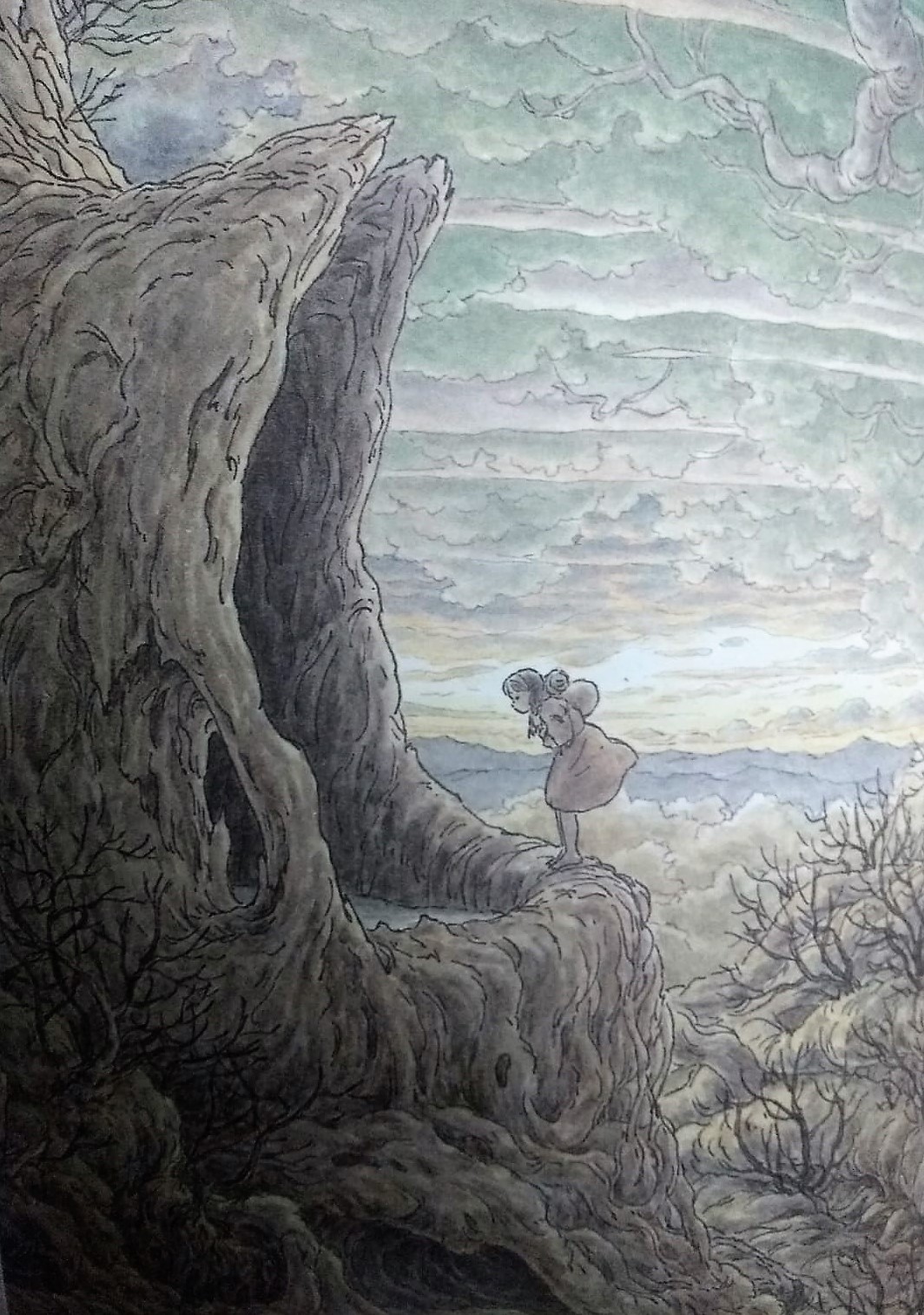 Makiko Futaki was one of the most important Studio Ghibli animators. Working with Miyazaki since Lupin the III: The Castle of Cagliostro in 1979, she contributed to almost all Studio Ghibli films as a key animator, from Nausicaä to Marnie. She also worked on Akira and The Wings of Honnêamise. Hayao Miyazaki considered her one of his most trusted co-workers. Unfortunately, she passed away far too early in 2016 at the age of 57.

Aside from her work as an animator, she published a few picture books for children and designed the cover of the Moribito books by Nahoko Uehashi (I will likely dedicate a few blog posts to Uehashi’s works at some point).

One of these books, The Tree in the Middle of the World (世界の真ん中の木), originally published in 1989, was re-released as a hardcover collector’s edition (愛蔵版) for its 30th anniversary for 2500 yen. I read this book and want to share a few impressions. Avery Morrow translated the first six pages a couple of years ago – you can read them here. 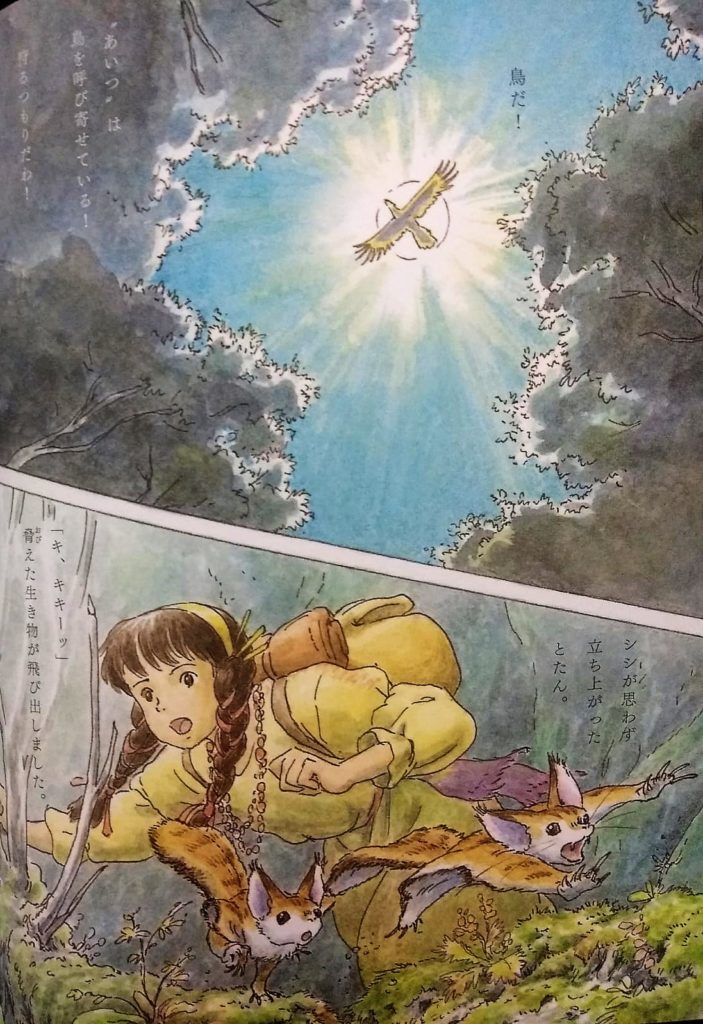 Like Miyazaki’s My Neighbor Totoro and Princess Mononoke, this book was inspired by the beautiful forests on the southern Japanese island Yakushima. I went there myself in March and can confirm that the mountain forests are stunning.

The story centers around a girl who lives close to a huge, huge tree – the world tree, you could say. One day, she sees a gigantic bird and is dazzled by its majestic appearance. With the goal to see that bird again, she begins to climb the huge tree and, on her way, encounters all kinds of animals and strange fantastical creatures living there.

However, these creatures seem to escape downwards. Some kind of murky water seems to poison the tree, making its leaves and branches wither. On her way up, the girl meets a talking frog and a boy from another country who accompany her on her quest to find out where that water comes from. 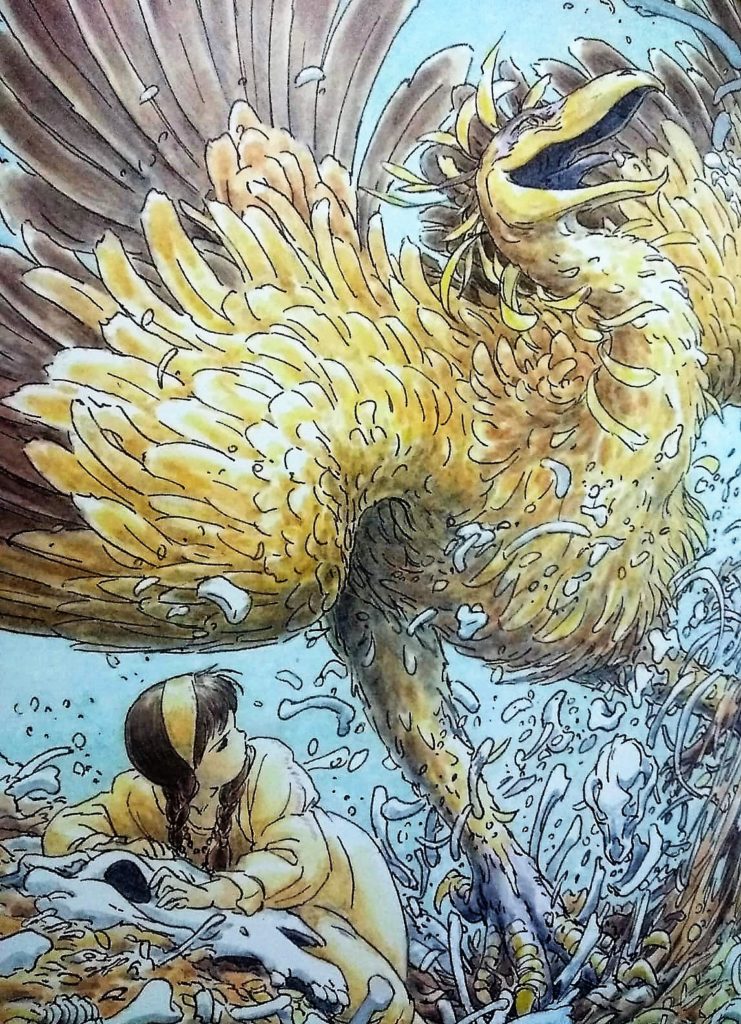 It’s a magical story. Not too original, one might argue. The theme of nature, pollution (this time not man-made), the interconnectedness of all living things and the absence of a good-and-evil duality are Ghibli staples. Indeed, the story is very reminiscent of Miyazaki’s Shuna no Tabi and one scene could be straight out of Nausicaä.

But the strong sense of wonder, the beauty of the drawings and the feeling of adventure still make the book very enjoyable. Not all strings come together as well as I had hoped, and the end feels a bit rushed, but overall, I had a lot of fun with The Tree in the Middle of the World.